A bronze relief of the institute founder Mr. Magosaburo Ohara was unveiled at a ceremony on February 4, 2016 as part of a 100-year anniversary that commemorated the establishment of the Institute of Plant Science and Resources (IPSR). To leave a permanent mark of this important milestone in IPSR history, a part of collected donations were devoted to creation of this original tribute casted by Mr. Masaru Miki, Okayama born sculptor and artist. Intentionally, Mr. Magosaburo Ohara is captured in the relief at his young age of 34, time when he established this institute under the original name, Institute for Agricultural Research in 1914. This relief situated at the entrance of the new Advanced Plant Science Building (opened in April 2015) is now going to remind us permanently of the original idea of its founder: “Promoting life of ordinary farmers through the ways of modern scientific research” 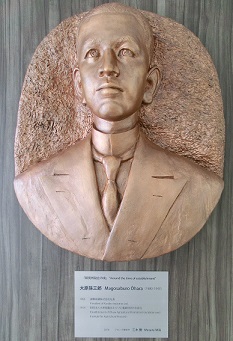 Following the ceremony, a large stone monument devoted to Rakuzan Koyama, was introduced to all attendees. Mr. Koyama was invited to the Institute for Agricultural Research by Magosaburo Ohara as renowned expert in fruit science, and he was one of the founding institute members in 1914. As his most remarkable achievements, he taught horticulture and established fruit orchard in Tayama (currently known as Mukoyama) that altogether laid a strong tradition to fruit production, and peach in particular, in Okayama Prefecture. For example, Koyama’s top disciple Jugoro Okubo developed a new peach known as “white peach” that is now used as principal fruit variety in Japan. While passing away in 1924, a stone monument was raised in his memory and contribution in the orchard in 1936. After closing down the orchard and reshaping the landscape that lost its original purpose, decision was made in 2014 to move the obelisk-shaped monument to its new location at IPSR campus, the actual place of the last Koyama teacher’s appointment in Kurashiki. Facing the Mukoyama (hill), it now silently accentuates the long history of this institute and contribution of its members to Okayama Prefecture and agricultural science in all Japan. 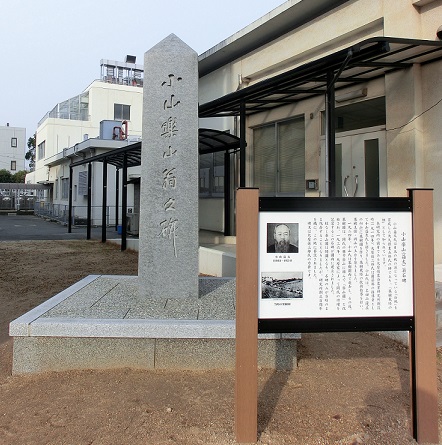